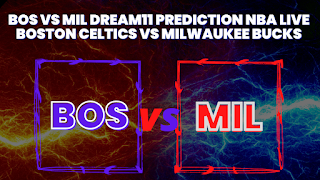 BOS vs. MIL Dream11: Hello NBA fans! The Second Round of the Playoffs brings us closer to the title series. And after 30 teams entered the regular season, we saw ten of these come out at the start of the Play-in tournament. There were 16 teams then and so far there are only eight teams left. And two of those teams will meet in the Eastern Semis when the Boston Celtics host the Milwaukee Bucks.

The Celtics defeated the Nets 4-0 in the first round when they shut down Durant and Irving, while the Celtics’ balanced scoring also helped them through tough phases. Now they will have to face Giannis. On the other hand, the Bucks quickly beat the Bulls after losing Game 2 and closed out the series four to one. Giannis continued to attack the opposition paint while Grayson Allen had some good shooting nights to help the team.

Giannis will have to defend against multiple bodies.

The Celtics are amazing at playing defense on the other hand and the main reason every player in their top five can play elite defense while being very physical and working hard. The Celtics have both the size and athleticism to counter Giannis, but he knows how to do it even from long range. Giannis’ presence will attract double/triple teams that will open shooting lanes for the likes of Jrue Holiday, Pat Connaughton, Grayson Allen and Wes Matthews.

The Celtics will also have to contend with the size of Lopez and the rebounding threat of Portis, two strong inside players who can be a factor at both ends. However, not having Middleton may hurt the Bucks’ balance a bit. Al Horford has done well against physical players and if Robert Williams III is in top form, he will be vital in keeping Portis off the boards. It will be interesting how coach Udoka approaches his rotation with Theis and Williams probably coming off the bench.

Brown and Smart’s guard rotation adds great flavor along with Tatum’s high-volume shooter. Brown can also get isolation points, while Smart can also be an effective scorer. The Celtics will rely heavily on the trio of Tatum, Brown and Smart at both ends. This series has a feeling of being a bit on the low scoring side considering how Giannis is the two-way factor along with defensive threats like Holiday, Lopez and Matthews while the Celtics were the better defensive unit after the All-Star Break.

Giannis remains the most reliable fantasy option, especially as an ace, while Portis has also become a great option due to his high-performance rebounding. Grayson Allen raised his stock last series, but I doubt the Celtics will let him score many points. On the other hand, the Celtics have Jayson Tatum, who is perhaps the most reliable fantasy pick, while Brown and Smart bring a lot of value. On the other hand, Al Horford can be a complete option, while off the bench Grant Williams looks more reliable than Derrick White these days.

Giannis Antetokounmpo (MIL)
Points: 33
Rebounds: 09
Assists: 03
Big forward Giannis continues to be a penetrating presence and has been doing a great job as an inside finisher as well as an elite rebounder and finisher. He thinks he will be at 24-29 points, 9-14 rebounds and 3-6 assists.
Expected Fantasy Point Range: 40-59

Jayson Tatum (BOS)
Points: 29
Rebounds: 03
Assists: 05
Wing Tatum can be a bit erratic from the field, but when he gets it going, the Celts look like an elite offense. He thinks he will be at 25-33 points, 4-8 rebounds and 3-6 assists. He is usually a candidate for Star Player / Pro in the Dream 11 NBA Fantasy script.
Expected Fantasy Point Range: 37-47

Junior Vacation (MIL)
Points: 10
Rebounds: 05
Assists: 09
Holiday continues to be an excellent ball handler and will face a lot of resistance from the Celtics’ Smart here. I think he will be in the range of 17-24 points and 7-11 assists.
Expected Fantasy Point Range: 30-40

Jaylen Brown (BOS)
Points: 22
Rebounds: 08
Assists: 03
Steals: 01
Brown, off guard, has been a great stabilizer on both ends of the floor and has been helping Tatum as the second-highest isolated scorer. He expects a range of 20-27 points, 6-9 rebounds and 3-6 assists.
Expected Fantasy Point Range: 34-44

Bobby Portis (MIL)
Points: 14
Rebounds: 17
Assists: 01
Center Portis has done a great job sealing the backboard and can also provide a more than decent offense. I think he will be in the range of 12-16 points and 9-13 rebounds here.
Expected Fantasy Point Range: 20-28

Smart Marcus (BOS)
Points: 20
Rebounds: 05
Assists: 11
Defensive Player of the Year Smart was in full swing last series, shutting down Kyrie and sure to put a lot of pressure on Holiday. I expect a range of 12-20 points, 6-9 assists and 4-6 rebounds here.
Expected Fantasy Point Range: 25-38

Where to watch NBA Live Score?

Do you want to see Giannis take on Tatum here? In great news for NBA viewers based in India, this match can be viewed on streaming platforms JIO TV and Voot, the two designated streaming services for viewers in India. On the other hand, Sports 18 and VH1 will also show it. Where can you see the other game? Get access to the NBA League Pass and purchase the annual subscription (Rs 599 per year) which gives you access to all live games while also being able to watch the full replay of the game if you are unable to watch the live stream. For scores, stats, and news, visit the official NBA website.