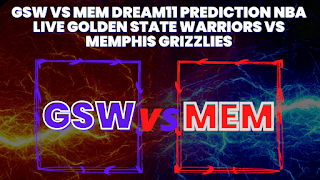 GSW vs. MEM Dream11: The NBA Playoffs are in full swing and we have already witnessed some extraordinary battles. The Eastern Conference has seen the 76ers close in after beating the Heat and making the series one-two, while the Celtics and Bucks are tied one apiece. In the Western Conference, the Mavericks made it a one-two series. And now we’re heading into the most interesting Playoff series in my opinion, as the Golden State Warriors host the Memphis Grizzlies.

The Grizzlies lost the first game but in the last game, their defense and a shot from Ja Morant carried them to a 106:101 win. Once again, the match went to the dying seconds, and Ja Morant’s ability to close out the match was in full swing. The Warriors shot terribly from long range and Klay Thompson was once again out of place. Will we witness another very exciting affair?

Two games, two thrillers. I knew this series would start that way considering how close these two teams are. To be honest, we haven’t seen the best scoring balance yet, especially from the Grizzlies team, a team that becomes too dependent on Ja Morant and loses the scoring balance at times, which was the strength of the team when Morant went down. This is because Bane has had little impact on offense and Jaren Jackson continues to be erratic.

But the Warriors also shot terribly from long range in the last game. Thompson has now had two below-average performances, but Poole and Thompson have done well. The problem with the Warriors is that they have a tendency to take bad shots and sometimes when pushing the ball they commit too many turnovers, as 18 of them explained in the last game. Another problem for the Warriors has been that the team isn’t closing out well, and even though they won Game 1, it was a pretty ugly win.

And so was Game 2 as an ugly win for the Grizzlies. Thanks to Morant, who nearly scored 50 points and showed one of his best games all season, but I don’t think this approach will help the Grizzlies win the series. The team’s bench has seen some inspiring play from Melton, but while Brandon Clarke remains a strong presence, his play isn’t as effective as it was against the Wolves. Will you see another close issue here? Will we see more expulsions?

Ja Morant(MEM)
Points: 47
Rebounds: 08
Assists: 08
Steals: 03
Morant inserted 15 of his 31 attempts in the last game and has been the sole focus on the Grizzlies’ offensive end, being on fire. He expects 30-36 points, 6-9 assists/rebounding range. He can be chosen as a Star Player / Pro in the Dream 11 NBA Fantasy script.
Expected Fantasy Point Range: 40-59

Desmond Bane (MEM)
Points: 05
Rebounds: 06
Assists: 01
Bane has made just two of his nine shots from deep in the two games and hasn’t been as much of a factor in the offense as he usually is. I expect a range of 13-20 points and 3-6 rebounds.
Expected Fantasy Point Range: 22-30

Jordan Poole (GSW)
Points: 20
Rebounds: 03
Assists: 05
Poole made eight of his 16 shots in Game 2, but made just one of his six attempts from long range and has done well sharing the ball. I expect a range of 20-26 points and 4-7 assists.
Expected Fantasy Point Range: 25-33

Dramond Green (GSW)
Points: 06
Rebounds: 10
Assists: 07
Blocks: 01
Draymond is one of the best defenders in the league while also being a great rebounder and providing elite plays. He thinks he will be in the range of 6-10 points, 6-10 rebounds and 5-8 assists.
Expected Fantasy Point Range: 23-38