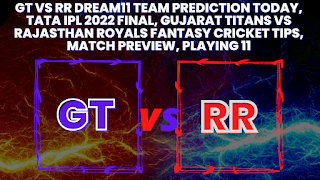 Rajasthan Royals will be ready to take on Gujarat Titans in this crucial final match at this season’s TATA IPL. Welcome to today’s GT vs RR Dream11 team prediction and match preview.

Gujarat Titans have managed to exhibit a run of champions since the beginning of their campaign, resulting in 10 wins from their last 14 matches, which could keep them motivated to make history by winning the title in their debut season.

Rajasthan Royals, on the other hand, are not far behind with 9 wins this season, which is well backed up with a surface lead from the second qualifier, plus the emotional tribute to the legendary Shane Warne, which could bring out the best in them. this contest

Gujarat Titans should win this match by a very slim margin.

The pitch is useful for batsmen along with limited assist for bowlers. The winners of the toss must bat first.

Wriddhiman Saha (8.5 Cr) He was not at his best the last time these 2 teams met in the first qualifier after losing his wicket to a duck to create most of his contributions with his skills behind the stumps.

Jose Buttler (10 Cr) he was able to show his reasons in the last 2 games as he was able to add 106 runs at a strike rate of 176.67 to boost his performance making him a potential game changer.

Sanju Samson (9.0 Cr) he is a team player as he was able to create decent but necessary runs in the top order, coupled with his performance with the gloves makes him an important player.

David Miller (9.0 Cr) he is a responsible contributor in the qualifying match as he was able to keep his place in the middle order with 68 runs at a strike rate of 178.95 which he can continue to improve in this contest.

Shubman Gill (9.0 Cr) he was able to add 35 runs to keep the scoreboard moving in his last match and was able to add some powerful strikes to boost his form, which could reach a better level in this match.

Devdutt Padikkal (8.5 Cr) He wasn’t in great form during the last game, but he managed to score 28 runs with a strike rate of 140 in the last game these 2 teams met, which could continue to improve his form for this game.

Hardik Pandya (10.5Cr) he played a key role in the last match after adding another 40 runs at a strike rate of 148.15 followed by 1 wicket, making him our first choice for this matchup.

Ravichandran Ashwin (9.0Cr) He was also able to show his focus and managed to find some important wicket in the last game which can be well supported with his batting potential attested throughout this season.

Rashid Khan (9.5Cr) he has incredible potential, but RR defended him well in his last match, which should keep him motivated to find his chances in this contest.

Mohammed Shami (8.5 Cr) will aim to bring his focused form into the game, which may see him hold off the opposition during powerplay overs, which may also add some game-changing wickets during those periods.

Obed McCoy (8.0Cr) he was able to show his brilliant understanding of the surface which saw him add 3 wickets at an economic rate of 5.75 which could raise confidence levels for this encounter.

H. Pandya he will be our captain because of his current form and potential to create consistent contributions.

J.Butler he will be our vice-captain because of his incredible understanding of the surface that can help him turn the tide of this match.