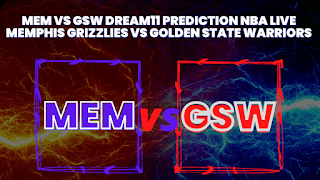 MEM vs. GSW Dream11: The NBA Playoffs are in full swing now and in a few days, we’ve seen 16 teams cut down to eight and from there we’re down to just four and eventually the bottom two. But before that, this Second Round promises to be fun and in this game, the West Semifinalists, Memphis Grizzlies, will host the Golden State Warriors.

The Grizzlies showed their best skills in Round 1 when they beat the Timberwolves in the last game and won the series 4-2. They’ll be itching to go up against the Warriors’ elite perimeter shooting. On the other hand, the Warriors won four to one against the Nuggets in what was mostly a one-sided series as the Warriors showed early dominance. The Warriors will be tough on both sides and start as favorites against the Grizzlies.

The Grizzlies’ perimeter shooting was terrible last series and it will be interesting to see how they respond against another tough perimeter defense on the Warriors. However, they also showed their prowess in the paint and their internal offense looks much better than the Warriors right now. Still, Grizz will need to take outside shots and they will especially need Ja Morant to complete the score sheet.

One area the Grizzlies can certainly be dangerous in is forcing turnovers. The Warriors are already a team that can be susceptible to making some tough angled passes, and the Grizzlies’ elite defense knows how to get their hands on the basketball. The Grizzlies’ shot-blocking skills have also been amazing, but I think the Warriors can take advantage of Jaren Jackson’s tendency to draw a lot of fouls.

For the Warriors, the duo of Steph Curry and Klay Thompson will be ready to unleash a flurry of shots. Curry is an incredible scorer and we know what he can do if he gets going. Historically, Conference Semis and Finals have been high-performance platforms. On the other hand, Wiggins will be key as a two-way forward facing the Grizzlies’ Dillon Brooks, while Draymond should be ready to contain Desmond Bane’s perimeter shot and also the strong driving game put up by Morant and Jackson.

Stephen Curry (GSW)
Points: 30
Rebounds: 05
Assists: 05
Steals: 02
Curry made about 50% of his shots against the Nuggets in the first round and has done an amazing job scoring early on. He expects a range of 27-34 points, 4-7 rebounds/assists.
Expected Fantasy Point Range: 32-44

Jaren Jackson Jr. (MEM)
Points: 18
Rebounds: 14
Assists: 01
Blocks: 02
Steals: 01
After being in a bad mood for most games in the last series, Jackson nailed three of his six attempts from the outside and had a solid game overall. He needs to avoid foul trouble and if he does, I expect a range of 12-18 points, 7-11 rebounds and 1-3 blocks.
Expected Fantasy Point Range: 25-35

Desmond Bane (MEM)
Points: 23
Rebounds: 07
Assists: 01
Blocks: 01
Steals: 01
Sharpshooter Bane nailed 27 3-pointers in the last drive and that’s a promising sign for a Grizzlies team that has struggled from the outside. I expect a range of 22-26 points here.
Expected Fantasy Point Range: 22-30