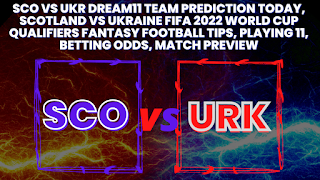 Scotland are set to take on Ukraine in the 2022 FIFA World Cup qualifier. Welcome to today’s SCO vs UKR Dream11 team prediction and match preview.

Scotland have not lost a match in any of their last 5 games in this tournament, highlighting their teamwork and potential which can raise confidence levels for this contest.

Ukraine have also managed to pull off a fantastic campaign which has raised the stakes for this game, along with a drive to give it their all for the nation considering the recent events which may work well in their favor for this game.

Scotland should win this match by a very narrow margin.

Ryan Jack and Kieran Tierney they are injured for this game.

Craig Gordon (8.5 Cr) he was wonderful in all of his matches for his team in this tournament in front of his goal, who can continue to build his form with similar momentum in this contest.

Jack Hendry (8.5 Cr) he is brilliant with his passing skills followed by decent interceptions and tackles which could lead to another showing of improvement in this match.

Liam Cooper (8.5 Cr) not only can he help hold the defensive line, but he could come forward with an attacking threat that could continue to add to his contributions in this crucial matchup.

Vitaly Mykolenko (8.5 Cr) He has known how to live up to the expectations that the order must maintain, which must give them the confidence to give everything in this game.

Mykola Matviyenko (8.5 Cr) he likes to work as a wall to help with clearances and the need to show his fighting spirit which could lead to good form in this crucial matchup.

Andy Robertson (9.5 Cr) he’ll have the confidence he usually has after wearing his team’s armband in a recent UCL final match that should be channeled into motivated form that makes him our first choice.

John McGinn (8.5 Cr) he is the top scorer in the knockouts with 4 goals that should be funneled into a similar performance, making him a crucial contributor.

Scott McTominay (8.5 Cr) He hasn’t had the best of seasons with Manchester United which could be channeled into a motivating way to prepare with more momentum for this game.

Oleksandr Zinchenko (9.0 Cr) He proved to be a valuable asset during the game or even off the bench as he was able to motivate Manchester City to make his comeback, making him a potential game changer.

Mykola Shaparenko (8.5 Cr) he is underrated considering his attacking potential, making him a strong contender and a crucial differential in this matchup.

Roman Yaremchuk (9.5 Cr) he is the top scorer for his team as he was able to score 3 goals in the qualifiers which should be well backed up with his best playing time for this fixture.

J.McGinn he is our captain for his brilliant performance in the qualifying matches.

A.Robertson He will be our vice-captain for his defensive abilities and his drive to attack to create counter-attack chances.